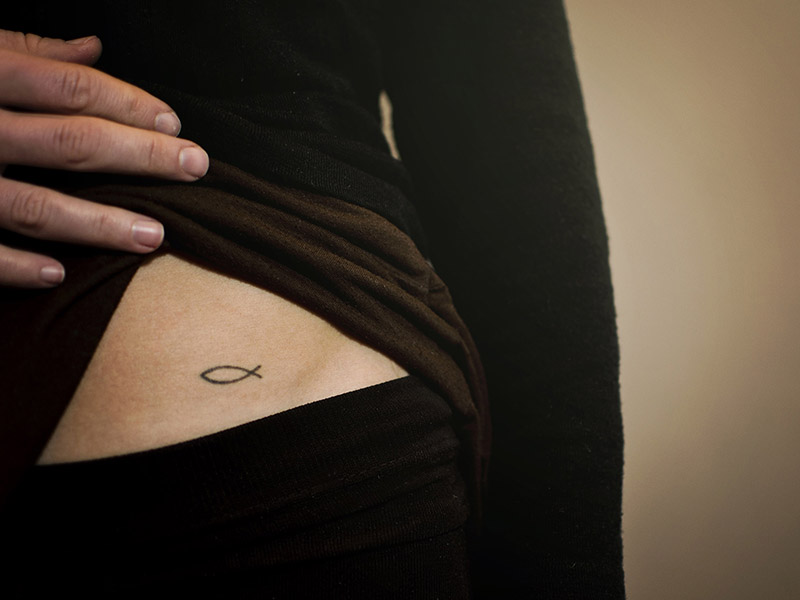 When my sister was getting her undergraduate degree, in Memphis, she decided that she wanted to get a tattoo of the ichthus symbol. So she did. When she emerged from the parlor, a very Southern gentleman was in the waiting area. He looked at her and said, “Honey, what’d you get?”
In her cross-culturally proper manner, my sister replied, “An ichthus.”


She proceeded to explain to him that an ichthus was the Greek symbol for faith: that simple little fish symbol.

“Where’d you get it?” he asked further.

She pointed to her hip bone.

He chuckled a bit then said, “Well honey, you might have yo’self a little fish now. But you just wait till you get pregnant–you gonna have a whale!”

For years, after learning of her tattoo, I harbored a secret desire to get a matching one, and to surprise her with a blank e-mail consisting of a simple photo of the tattoo, to see if she would figure out what I had done. As we lived on separate continents, ways to connect with here were extra important to me. But at the same time, I was a support-raising, independent missionary at the time, used to pinching my pennies and horrified at the idea of any extravagant spending on my part. So I could not justify it for myself.

But one year, when I returned to the U.S. from Africa, I was telling a high school friend about the fact that my desire for that tattoo just wouldn’t go away. She thought for a moment then asked if I knew that our mutual friend was now working as a local tattoo artist. I didn’t know that, and agreed with the suggestion that we should go ask her how much it would cost.

When we arrived and showed her the sketch, my friend looked at it and waved off the idea of a cost. It would be free, she said, because she was still an apprentice and needed to experience.

So right then and there, I got my tattoo, and I fulfilled my dream. My sister figured it out right away.