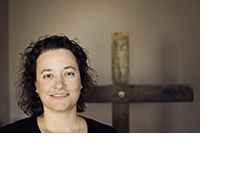 When I surrendered my life to Christ, I had a deep misunderstanding of what that meant. I was drawn to a relationship with Him unlike anything else in life, but I pictured Him forcing me into servitude in a hut in Africa as single missionary with a felt board, telling Bible stories to half naked children. My life had always been my own and I had done as I pleased, but I had given my life to someone else. Turns out, my name (Rebekah) means “Bound,” or “Bound to the Lord.” I was literally named “Slave of God.” I began working that idea out in my life by conforming my life literally to 1 Corinthians 6:20: “You were bought at a price. Therefore, honor God with your body.”

I forgot that. Often. So I had my name tattooed in Hebrew on my right wrist to remind me daily that my life is not my own.

In April 2011, I added the chain and cross to complete the bracelet and to show that I am not only bound to God, I am a slave of Christ, a title proudly worn my early Christians. But that seems heavy and oppressive, especially in our Western culture where we have such a dark history of slavery. The biblical term and the modern term are separated greatly from one another.

This past year, I became involved in work with the She’s Worth It Campaign, a third party fundraising organization created to support organizations already working with women rescued from human trafficking. In studying what Scripture had to say about freedom, I was drawn again and again to Galatians 5:1, which says, “It is for freedom that Christ has set you free.”

And it all clicked. He purchased us as slaves, but in His love, He set us free. My love for Him draws me back to willing service as a child seeking to please her Father, not a slave forced by fear. So my left bracelet represents the freedom found in being bought by Christ. The Greek word is translated “freed”, and the bracelet is completed with a skeleton key, a symbol of the abolitionist movement of the 19th Century.

As Christ’s representative on earth, it’s my calling to take His light to dark places, to literally set captives free, and my faith marks are daily reminder of that to me and an opportunity to share my work with others when they ask me what they mean.